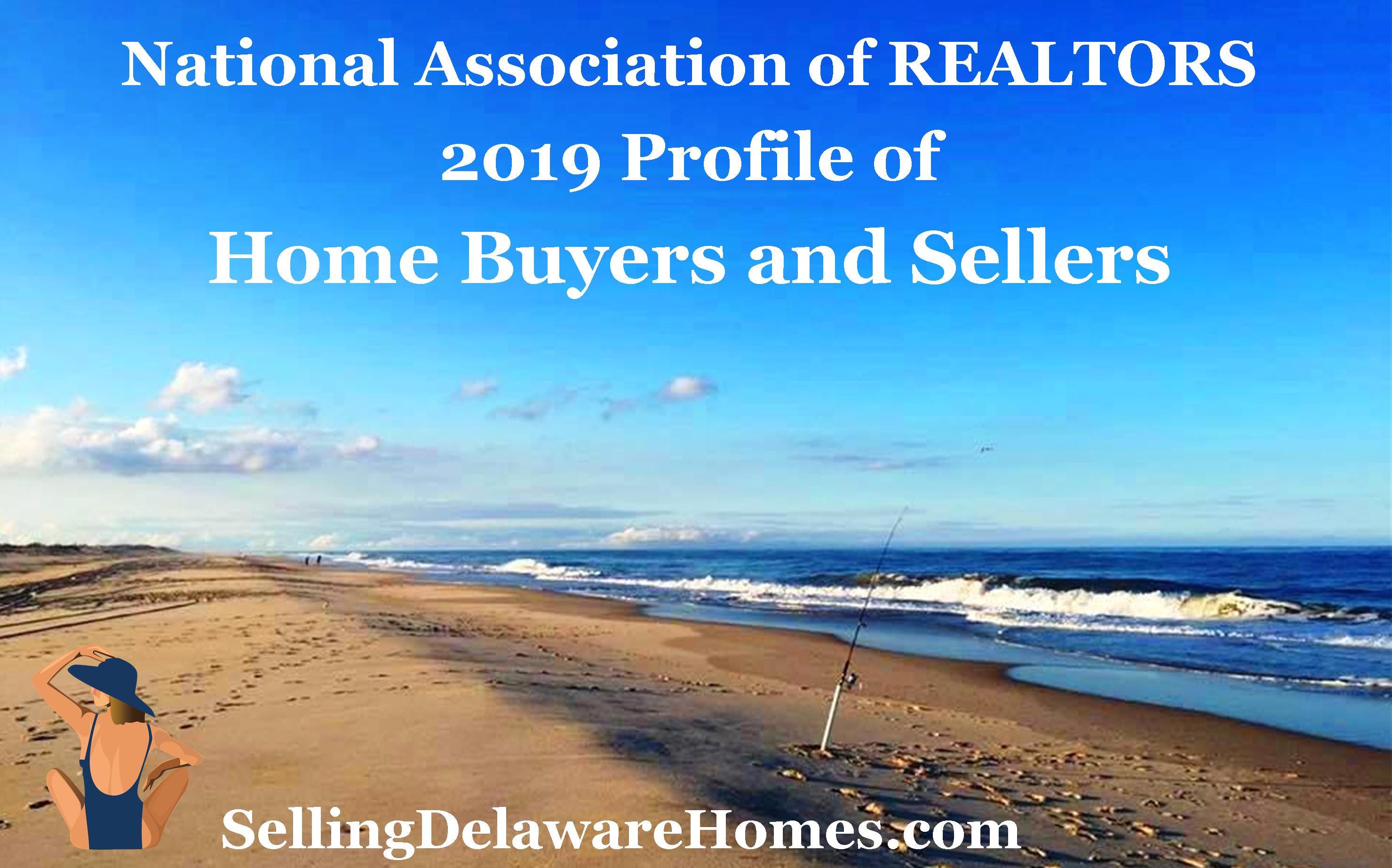 2019 PROFILE OF HOME BUYERS AND SELLERS

Since 1981 the National Association of Realtors (NAR) has conducted an annual survey of recent home buyers and sellers “nationally” in an effort to gain insight into their buying or selling experience.

Below is an excerpt of the 2019 Survey.  For the Full Report please contact me at Babs@SellingDelawareHomes.com and I’ll be glad to email you the full report.

First-time buyers made up 33 percent of all home buyers, holding steady from last year’s 33 percent.

**  Twelve percent of home buyers purchased a multigenerational home, to take care of aging parents, because of children over the age of 18 moving back home, and for cost-savings.

**  At 29 percent, the primary reason for purchasing a home was the desire to own a home of their own.

**  Detached single-family homes continued to be the most common home type for recent buyers at 83 percent, followed by six percent of buyers choosing townhomes or row houses.

**  Senior-related housing dipped slightly this year to 12 percent, with 20 percent of buyers typically purchasing condos and 9 percent purchasing a townhouse or row house.

**  Home prices increased slightly this year to a median of $257,000 among all buyers. Buyers typically purchased their homes for 98 percent of the asking price.

**  The typical home that was recently purchased was 1,850 square feet, had three bedrooms and two bathrooms, and was built in 1990.

**  Heating and cooling costs were the most important environmental features for recent home buyers, with 85 percent finding these features at least somewhat important.

**  Overall, buyers expected to live in their homes for a median of 15 years, while 20 percent said that they were never moving.

**  For 44 percent of recent buyers, the first step that they took in the home buying process was to look online at properties for sale, while 16 percent of buyers first contacted a real estate agent.

**  Buyers typically searched for 10 weeks and looked at a median of 9 homes.

**  Among buyers who used the internet during their home search, 87 percent of buyers found photos and 85 percent found detailed information about properties for sale very useful.

**   First-time buyers who financed their home typically financed 94 percent of their home compared to repeat buyers at 84 percent.

**   For 13 percent of buyers, the most difficult step in the home buying process was saving for a down payment.

**   Buyers continue to see purchasing a home as a good financial investment. Eighty-one percent reported they view a home purchase as a good investment.

Home Sellers and Their Selling Experience

**   For all sellers, the most commonly cited reason for selling their home was the desire to move closer to friends and family (16 percent), that it was too small (13 percent), and a job relocation (11 percent). Sellers typically lived in their home for 10 years before selling, up from last year.

**   Eighty-nine percent of home sellers worked with a real estate agent to sell their home.

**   For recently sold homes, the final sales price was a median of 99 percent of the final listing price.

**   Recently sold homes were on the market for a median of three weeks, the same as last year.

**   Thirty-four percent of all sellers offered incentives to attract buyers.

**   This year, home sellers cited that they sold their homes for a median of $60,000 more than they purchased it.

**   Sixty-six percent of sellers were very satisfied with the selling process.

The above is an excerpt of the National Association of REALTORS 2019 Profile of Home Buyers and Sellers.  For the full report please contact me at Babs@SellingDelawareHomes.com and I’ll be glad to email you the full report.